‘The Other Schindlers’ is now available in Danish 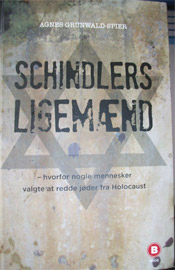 I am very pleased to announce that my book, ‘The Other Schindlers’, is now available in a Danish translation. There are 3,000 copies of this newest version available under the title ‘Schindlers Ligemænd’ which means ‘Schindlers Peers’ and is published by BROE (ISBN – 978 87 92336 71 2). The distributor tells me 200 copies were sold in the first five weeks.