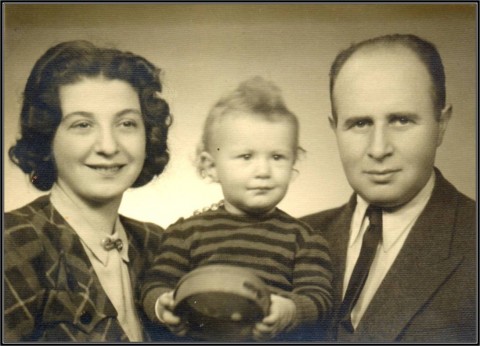 Agnes with her parents in Budapest 1946

Following success in the 11+ examination, I was awarded a free place at Sutton High School for Girls (1955-1963) from where I went to Oxford Brookes to study Politics and History. I worked as a civil servant 1967 – 1975 where the highlight of my career was 6 weeks in Geneva as part of the UK delegation to the 1971 Space Telecommunications Conference. I was married in December 1968 and after 10 years when all hope of children had been abandoned, suddenly 3 sons appeared with remarkable regularity. Dan (33), Ben (29) and Simon (25) are a great joy and very close. Daniel married Michelle in September 2008 and their son Jamie was born on 1 January 2010. I lived in Belbroughton in Worcestershire for 16 years where in 1983 I was elected to the local Parish Council which I chaired 1989 -1991. In this period the village was threatened by the extension of the M42 motorway and I created an action group to fight to preserve the area. The extension was never built. In 1984 I was appointed as a magistrate or Justice of the Peace (JP) to the Bromsgrove Bench. From 1992 I sat on the Sheffield Bench and I completed my 30 years service on the Highbury Bench after my move to London in 2012. I was also responsible for the establishment in 1980 of the Belbroughton History Society which is still in existence. Whilst I was Chair (1980-1989) 5 booklets on the village’s history were published which developed my interest in historical research. 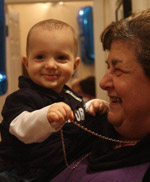 Agnes with Jamie on his first birthday.

I divorced in 2000 and have since pursued several paths with a varied portfolio of public appointments including: Deputy at the Board of Deputies of British Jews since 1997, the Home Secretary’s representative on selection panels for the South Yorkshire Police Authority 1999-2007, Chair of the Friends of Sheffield Galleries and Museums 2000-2002, Lay member of the General Social Care Councils Panels 2003-2011, Jewish member of the Yorkshire and Humber Faiths Forum 2005-2008, Lay Member of the Herbal Medicines Advisory Committee 2005-2009, Trustee of the Holocaust Memorial Day Trust since 2004, lay member of the Architects Registration Board and a Diversity in Public Appointments Ambassador from Nov. 2009. All my life I have lived with the knowledge of my survival of the Holocaust and tried to ignore the subject. It was only in my 50s when I became involved in bringing the Anne Frank Exhibition to Sheffield in 1995 that I felt I needed to know more in order to be able to discuss the matter with my sons. I decided to sign up for the new MA in Holocaust Studies at Sheffield University. This created an interest in the motivation of Holocaust Rescuers which ultimately led to ‘The Other Schindlers’. 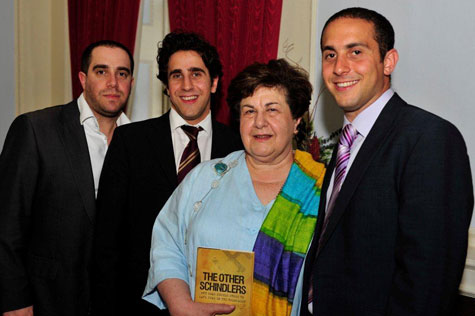 Agnes and her sons at the London Book Launch in 2010.

The sombreness of the Holocaust does not mean that I’m just a serious person. I love the theatre and ballet, visiting galleries, museums and interesting buildings. I am an enthusiastic collector of porcelain and appeared on two TV programmes about antiques during the summer of 2011. I am a good cook and love eating with friends and family in good restaurants – hence my perpetual weight battle. I am a member of the committee of the British Epicure Society and regularly attend both the Mensa Black Tie Dinners and those of the Historical Association’s Dining Club, whilst dieting in between!!!