One of our Trustees, Louise Ellman MP together with Mike Freer hosted a Reception for the Trust on 5 July in Dining Room B. The purpose of the event was to launch the theme for Holocaust Memorial Day 2013:

Communities Together: Build A Bridge

We also launched the booklet of poems which were chosen by the Trust from the many entries to the poetry competition held for HMD 2012.

Months of preparation were thrown into panic when David Cameron chose the same afternoon for his debate on the banking crisis but the MPs did not let us down as there were 42 Parliamentarians guests including Eric Pickles, the Secretary of State responsible for HMD who spoke to the event. It was particularly encouraging that our guests were cross-party, representing the Conservatives, Labour and Liberal Democrat, and that the Shadow Chancellor, Ed Balls, sent his Chief of Staff to the event. Holocaust survivors together with survivors of other genocides were present as well as organisers of local activities from all round the UK.

I know that the high number of Parliamentary guests is indicative of their personal commitment to the aim of commemorating HMD; however, it also reflects the hard work and attention to detail from the HMDT team and Louise’s office. I hope that this will now become an annual event.

It was encouraging to hear the MPs express their support and interest. I was pleased to chat to a variety of people including Kemal Pervanic, a survivor of the ethnic cleansing of the Bosnian War and Dr. Hywel Francis MP who chairs the parliamentary Joint Committee on Human Rights. I also had a chance to catch up with my colleague at Neath, Lesley Blower. 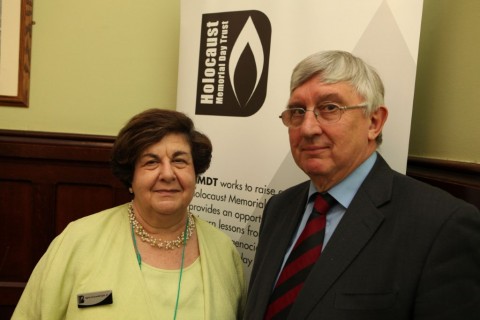 Further information about this event can be found on the Trust’s website, www.hmd.org.uk, and the other sites below.