Agnes spoke at the Yom HaShoah event in Glasgow, Scotland on Wednesday 18 April 2012. Hosted by the Glasgow Jewish Representative Council  whose Chair is Edward Isaacs who is married to another Hungarian Agnes. The event was held at Giffnock and Newlands Synagogue Banqueting Suite attended by over 200 people, including Roseanna Cunningham, a Scottish Government Minister.

Agnes’ presentation was very well received and covered in the Glasgow edition of the ‘Jewish Telegraph’ for 20 April. It was followed by a remarkable presentation by children from the local Jewish school using some of the stories of hidden children in ‘The Other Schindlers’. They had worked on the stories and some of them were told in the first person.  Agnes found this particularly moving. 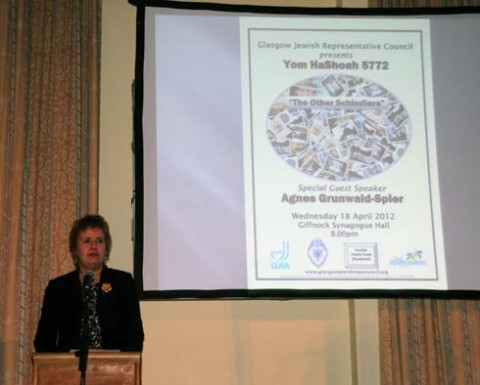 Whilst in Glasgow, Agnes had the opportunity to attend a reception held by Anne Frank Scotland for their new exhibition ‘Anne Frank, A History for Today’ at the Kelvingrove Art Gallery on 17 April. On Thursday Agnes visited the children at the Calderwood Lodge Jewish Primary School  and found the children very interested in her story and asking the most inventive and demanding questions. She then enjoyed an excellent salt beef sandwich at Mark’s Deli’s new eaterie with many of the team who had hosted her during the trip.

On Wednesday, Gordon Gibb, a friend from the Architects Registration Board took Agnes on a wonderful tour of Rennie Mackintosh’s masterpiece The Glasgow School of Art and later to see the India building at Inchinnan. The India building was where the airships were built in the early part of the 20th Century. It was later the home of the India tyre company and the iconic Art Deco building was designed Thomas Wallis famous for the Hoover building at Perivale. Gordon’s award winning design to renovate the building replicated the shape of the gondola  of the airship. The building was re-opened in 2003. 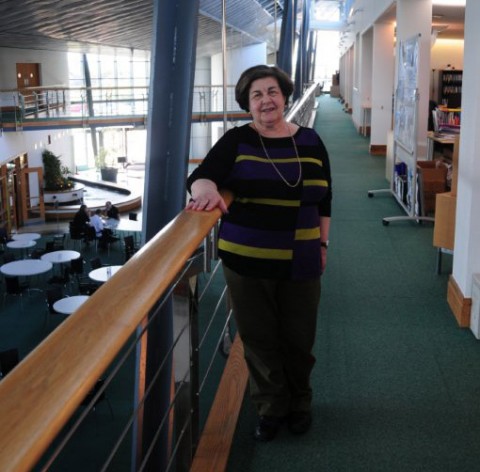 Agnes in the India building with the gondola-shaped ceiling

A remarkable postscript to the trip was provided by Edward Isaacs’ mother-in-law who was a fourteen year old girl in the Budapest Ghetto. She told Agnes that there were hardly any babies in the ghetto and she distinctly remembers seeing a young woman with a baby in the ghetto. She remembers going to see them regularly because they were such a novelty. Was that baby Agnes with her Mother?

For more information on Yom HaShoah in the UK, please visit www.yomhashoah.co.uk.