6th March 2013: The First European Day of Remembrance for the Righteous

I have now returned from a very soggy Milan. Those of you who have read the earlier pieces of 24 November 2011 and 27 February 2013 will know that it was as a result of writing ‘The Other Schindlers’ about Holocaust Rescuers that I was invited to join the campaign to get the European Parliament to approve 6 March as a European Day of Remembrance for the Righteous by the Italian charity Gariwo.

I emailed all the UK MEPs and some of them did promise support. On 10 May last year the proposal reached the required number of votes and was approved.

Therefore 6 March 2013 was the first day. When I was invited to the Milan commemorations I thought ‘Why not?’. Gariwo recommended the Palazzo Delle Stelline Hotel which is a very old ecclesiastical building with a courtyard. It was where Leonardo de Vinci lived for the 4 years he was painting ‘The Last Supper’ in the refectory of the Santa Maria monastery over the road from 1494-98. 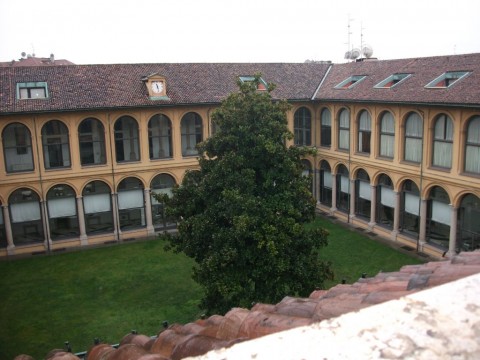 I arrived on 5 March and enjoyed a Dinner in the hotel with many of those who were involved in the next day’s commemorations. I remember the starter that appeared was a beautiful yellow bowl of something smelling divine. I was told it was Risotto Milanese which was made with saffron, parmesan and stock. It was absolutely wonderful and I am determined to try to make it. I was told that I needed special rice – not arborio but carnaroli.

The next morning a minibus collected us to take us to the dedication of trees in the Garden of the Just at Monte Stella. Four people were to be honoured – Vaclav Havel, the Czech Republic’s first President 1993-2003 and playwright; Fridtjof Nansen, the Arctic explorer, Nobel Prize winner and human rights activitist; Dimitar Peshev a former fascist who when he realised the Nazis’ plans led the opposition to the deportation of the Jews and Samir Kassir a Lebanese journalist assassinated in a car bomb in 2005. Relatives of these honoured people were present to dedicate the trees and plaques, except for Nansen who was represented by the Norwegian Ambassador. In spite of the terrible weather there were a lot of people there and a lot of teenagers which I was really pleased to see. 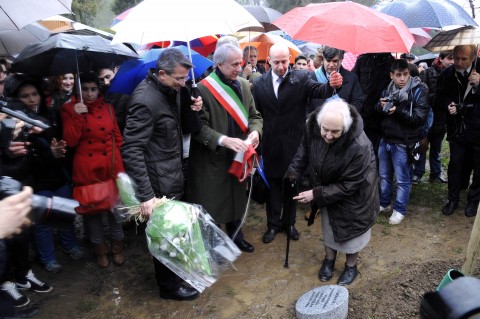 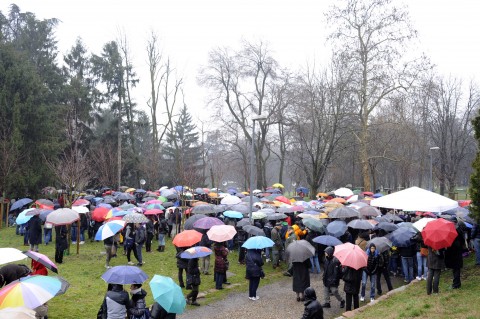 After the ceremonials were completed at all four trees we went by minibus to Milan’s City Hall at the Palazzo Marino. On arrival the minibus squeezed through a tight doorway and we found ourselves in a small courtyard. It felt as though I was in the Italian Job and I expected to see red, white and blue Minis roaring in!!! The buffet Lunch was delicious and quite remarkable because it was prepared and served by a company operating out of a local prison. Two enterprising women had created abc la sapienza in tavola a gourmet company to train offenders in the catering business. However I don’t think the serving prisoners have such splendid food.

After a brief siesta we were escorted over the road to the Church of Santa Maria delle Grazie for a guided tour in English of Leonardo’s masterpiece. I last saw the famed fresco about 50 years ago when it and I had much ahead of us. I had my adult life to come and the fresco had a twenty-year restoration  which removed  previous restoration material and layers of dirt. It which was completed in 1999. Our guide was wonderful and explained that this was a very significant work because it was the first religious painting to display emotions.  Leonardo chose to show the moment when Jesus predicted Judas’ betrayal and the faces of the disciples demonstrate their shock. The fresco’s other revolutionary aspect is the use of perspective which makes the viewer feel part of the scene. I was really pleased to have seen it again, especially as I was staying where Leonardo had lived whilst painting it.

After a brief break we were taken to the Palazzo Reale for a viewing of the art exhibition ‘Modigliani, Soutine and damned artists’ which had been curated by Marc Restellini of the Pinacotheque Gallery in Paris. The exhibition is based on the art collection of the  mysterious Jewish art collector Jonas Netter. It is a wonderful exhibition and I can thoroughly recommend it.  Following the tour we were led into the amazing Sala delle Cariatidi in the same building for a concert of classical music and jazz.

The Sala delle Cariatidi was designed by Gieseppe Piermarini in the 1770s . Unfortunately it was very badly damaged on the night of 15 August 1943 by British bombs. It was re-roofed but the destruction in the body of the hall and to the Caryatids all round has been left as a reminder of the war. The concert was lovely with just two pianists with a recitation  in the middle. The classical pianist was Janusz Olejniczak who is an extremely well known and in recent years has been seen by a world-wide audience as the hands of the actor Adrien Brody in Polanski’s film ‘The Pianist’.

This long and fulfilling day ended with Dinner back at the hotel after 11.00 pm. I enjoyed myself but felt sorry for those catching an early flight the next morning. All in all Gariwo with the support of the City of Milan had ensured that the first European Day of the Righteous was memorable. Celebrations were also held in Brussels, Prague, Sarajevo and Warsaw. I am proud to have played a small part in achieving the recognition of the day. I think its particularly important that such courageous people are remembered and honoured. Young people need true heroes to act as role models – not just over paid footballers and pop idols like Justin Bieber!!!!! 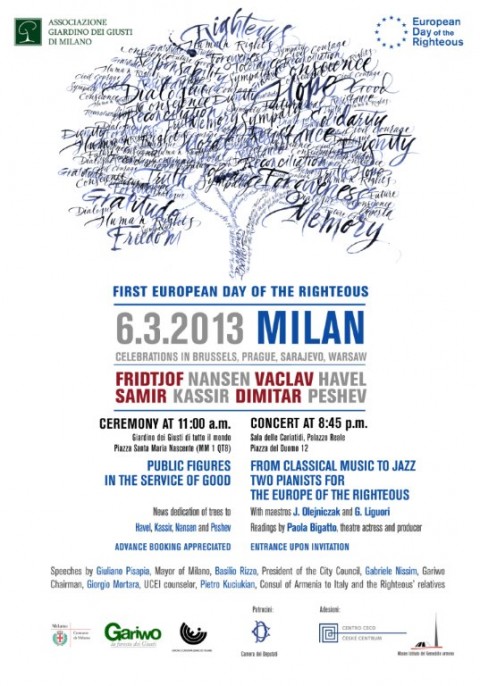 NOTE: I first wrote about the proposal, to make 6 March a day to remember the Righteous from all genocides, in my blog on 24 November 2011. I was delighted to report that the efforts made all over Europe to get agreement on this proposal in the European Parliament were successful. On 10 May 2012 the declaration reached the required 388 signatories. Henceforth 6 March will be dedicated in Europe as a day to remember all the men and women who have fought genocides and defended human rights, often at great personal risk.

As Gabriele Nissim, the originator of the project, wrote on 18 May:

With the approval of this declaration, for the first time in European history, we remember the Good and the deeds of those who saved human dignity during all genocides and all forms of totalitarianism.

I am delighted to have been part of this campaign and thank all the British MEPS who supported it after I wrote to them.