Home > Blog > ‘The Other Schindlers’ – Neither Myth nor Miracle

‘The Other Schindlers’ – Neither Myth nor Miracle

I was delighted to see ‘The Other Schindlers’ featured on a Christian Science blog called Neither Myth nor Miracle in which the author, Tony Lobl, reflects on the motivation of individuals and organisations to save the lives of Jews during the Holocaust.

As I carried out my research for the book, I was fortunate to hear, read and learn about the untold stories of many who saved lives, and it’s wonderful to read that the book has inspired others to tell these stories, such as the one told by Tony Lobl of ordinary people carrying out extraordinary acts.

Tony attended my Sheffield Book Launch and is also the child of Hungarian survivors. His father was a forced labourer on the Russian front like mine but was only reunited with his fiancée after 8 years as he was incarcerated in a Russian prisoner-of-war camp in Siberia. 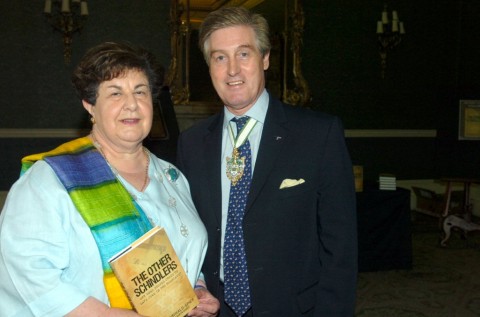 James Newman, the 2010 Master Cutler, who hosted the Sheffield Launch of 'The Other Schindlers' at the Cutlers' Hall with Agnes on 12 July 2010.