Home > Blog > ‘The Other Schindlers’ crosses the Atlantic.

‘The Other Schindlers’ crosses the Atlantic.

I am a member of the World Federation of Jewish Child Survivors of the Holocaust (WFJCSH) and they hold an annual conference. In 2010 it was to be held in Skokie, Chicago. When I heard that my book would be released in the US in November my vague plans to attend the conference took shape. The third strand in the decision was the offer from the UN Bookstore in New York of a presentation and book signing which seemed too good an offer to turn down. This was fixed for 11 November – Armistice Day which was a suitable date. After lots of e mails and frantic networking I had an itinerary put together, flights booked, internal ones with the US Easyjet – JetBlue and accomodation sorted. I set off with great excitement and when I arrived at O’Hare airport in Chicago the woman at passport control asked me the purpose of my visit and I told her I was an author promoting my book. She was very interested and asked me about it, but I refrained from giving her a flier.

After the Skokie conference I flew to New York and stayed at the  Washington Square Hotel where Bob Dylan lived in 1961 – it seemed appropriate because the Hotel describes itself as a haven for writers for a century!!! Other celebrities who stayed there were Ernest Hemingway, Dylan Thomas and my beloved Rolling Stones. Joan Baez even wrote a song, presumably about Bob Dylan, with the line, “Now you’re smiling out the window of that crummy hotel over Washington Square.”

As I walked round the area, I also thought about the Henry James story of Washington Square made into that wonderful 1949 film with Olivia de Havilland as the heroine. The hotel is a very quirky place and unusually for American hotels breakfast is included. I had a rather pokey (cheapish by New York prices) room until I explained I was having a radio interview by phone with veteran broadcaster Barry Farber, when I was immediately upgraded to a lovely room on the 8th floor with a great view. Barry was a chum of Charles Fawcett from the days when they were both involved in the 1956 Hungarian Revolution. April had set up the interview which I found rather disconcerting because I sat in my room chatting to him whilst his wife Sara chipped in. One evening when I got lost coming back from seeing Patrick Stewart in David Mamet’s hilarious play ‘A Life in the Theatre’ on Broadway I found a wonderful ice cream parlour called Cones selling delicious flavours. It was great to see so much British theatre on Broadway but be warned they start at 7.00pm and the tickets are mega bucks. When I asked about ‘pensioners’ prices’ the young man in the Box office was baffled but he did recommend a nice restaurant.

The next day was my big appearance at the UN which was extraordinary – I’d last visited the UN as a student in 1964 and would have been amazed to have had foresight of my next visit. I’d chosen 11 November as a  suitable date but my slot was at 13.00 not the eleventh hour. However I had carefully brought a poppy from England to wear and miraculously found it on the day.

The staff were very organised and had a pile of my books all ready. I was extremely well received by the audience, had good questions and sold nearly all the books. My appearance in the UN bookstore is recorded on YouTube and I have the poster and a little mini UN flag on my desk as mementos. 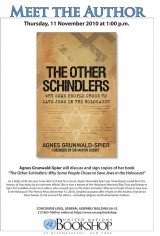 The next day I took the Amtrak train to Washington DC for my Lunchtime session at Georgetown University.  Again my presentation was well received and many books were sold and signed. I was pleased to see an old friend from the Board of Deputies, Dina Gold, with her son who recognised my youngest son Simon from when they both worked for AISEC. That evening I was invited for Dinner with other old chums from the Board, Dianne and John Webber in their lovely apartment where I met some interesting locals.

The next day was my book signing at the Washington Holocaust Museum (USHMM) which had taken weeks to organise as before they agreed to a Book Signing, my book had to be read and approved by the Senior Historian who proved to be a rather slow reader. However it was eventually agreed that I could do a Book Signing and the weekend close to Veterans’ Day, which is their Armistice Day, was suitable. I was seated at a table at the back of the bookshop with a pile of books. Lots of people stopped to chat but most were buying small souvenirs rather than hardback books at $26.95. The most bizarre moment came when a school party asked me to sign a baseball ball. Their teacher later wrote to me explaining:

I’m so thankful you contacted me! I will always remember meeting you in Washington D.C. this past November. Thank you so much again for signing my copy of your book, but more importantly, thank you for giving voice to the survivors and rescuers about whom you wrote. I greatly value the opportunity to teach my students about the Holocaust through literature; it is a study dear to my heart. We hope to begin offering a Holocaust studies class at our school in the future. …..

Here is the ‘story’ behind the baseball you signed for us: When I met you at the museum that day, I was a chaperone for ~80 9th grade students from Myrtle Beach, SC where I am a high school English and public speaking teacher. As a way to help our students pay a little closer attention to all the sights and symbols of D.C., our lead chaperone puts the students into groups of about 10, with one chaperone as their leader, and each group receives a sheet of Washington D.C.-related riddles and brain teasers. The answers we’re looking for are all sights we can find around D.C. We received extra points if we take photographs of the riddle answers (Dorothy’s ruby slippers, Apollo 13 capsule, Supreme Court building, etc.), and also if we are able to get the signatures of folks such as military veterans, senators or representatives from Congress, and a Holocaust survivor.

A baseball might not seem like a very formal vessel, but they are often used to gather valued signatures, and it was easy to carry it around on our daily walks through the city. The students in my group would take turns holding on to our baseball, always on the lookout. It was good experience for them to be more observant, and to learn how to respectfully approach people to politely ask who they were. We were fortunate enough to meet some very intriguing people, including you, and I keep my group’s signature-filled baseball in my classroom so my students can visit it any time they wish.

Just a side note, my particular group of students did so well gathering answers, photos, and signatures that we won the competition! Knowing these students, I am quite content that they will remember what they saw, learned, experienced, felt, and the people they met much more than they will the candy they received as a prize. Our kids had so much fun learning, they didn’t even realize they were doing so.

I hope you had a safe and enjoyable trip in the States. I would love to keep in touch, if that is alright. Best wishes and safe travels, 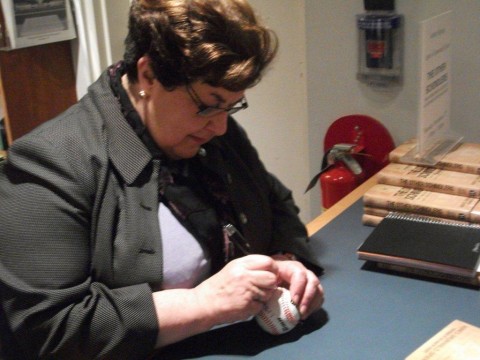 From Washington I flew by JetBlue  which is an amazing airline – very cheap and wonderful service. You get a free drink and snack on each flight and this may include their special blue crisps (chips) made from true blue potatoes. I went to Vermont to stay with a fellow Hungarian survivor Susan Turnau and her husband Jim. Unfortunately it was a little too late to see the beauty of the Fall. Susan and Jim built their wonderful house just outside the town of Stowe where I spoke at the Jewish Centre on 14 November. They have a wonderful view from the house and hidden in the trees is the von Trapp Family Lodge and at my talk Rosemary Trapp  (no ‘von’ any more) bought a copy of my book and gave me an enormous breath-defying hug. 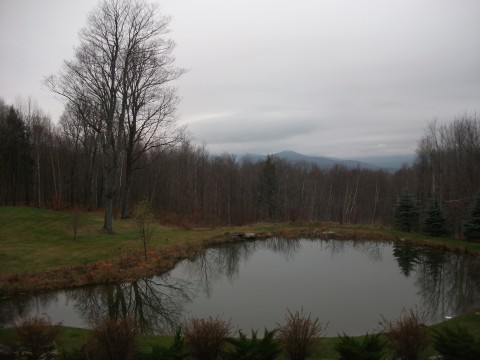 View from Susan and Jim Turnau's home in Stowe, Vermont - the von Trapp home is hidden by the trees.

From Stowe I went to Providence, by JetBlue again, to visit Arleen Kennedy who was the eldest daughter of little Suze who was saved by the Schoen family – her photo is on the back of the hardback edition. I stayed with her and her husband Ted and met their youngest son Jason. Suze was brought to the US in 1953 by her Aunt Klara, her mother’s sister, who married another survivor and wrote a memoir of her family’s experiences in the Holocaust. I was given a copy of the memoir by her son Marcel and much of the additional material I found appears in the Postscript to the paperback edition. 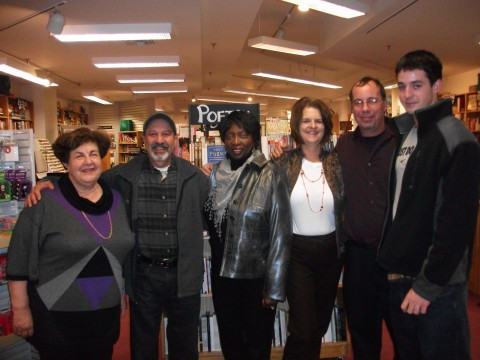 Left to right Agnes, Marcel Aardewerk and his wife Elaine, Arleen, Ted and Jason – photographed in the bookshop Books on the Square in Providence. Arleen and Ted were most hospitable and I was able to chat to Arleen about her Mother and to speak via Skype to the daughter of Suze’s rescuers Tiny van Rijswijk and her son Ed who live in the Netherlands. The results of these conversations are recorded in the Postscript of the forthcoming paperback edition. On my last day in the US they took me to see the very windswept Ocean at Newport which was a lovely finale to my trip.

The next day at the crack of dawn, I flew out of Boston back to the UK wondering what my parents, my maternal grandparents, including Armin who was killed at Auschwitz, whom I never knew and my three Aunts would have thought of me showing their photographs and telling their life stories to so many people. My valiant red and black suitcase managed to get through the door of my flat and then dramatically the handle broke – it was as though it knew it had to hang on until it had got me safely home.

There I found a letter from my editor, Simon Hamlet, telling me that my book would be one of their first eBooks and additionally they were re-printing the hardback edition for the second time.

‘The Other Schindlers’ has not only developed a life of its own but it has certainly changed mine – thanks to all the support I have had on both sides of the pond.