Sutton High School Old Girls hear about ‘The Other Schindlers’ 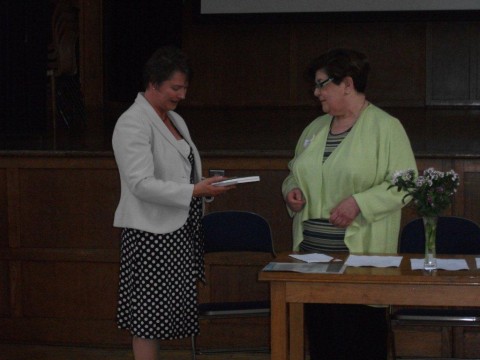 Agnes presenting Mrs. Crouch, Acting Head, with a copy of her book for the Sutton High School Library 14 May 2011.

14 May 2011 was the annual Old Girls (alumni) Day at my old school in Sutton in Surrey. One of my contemporaries, Margaret Condick, gathers our year together at regular intervals and this was our first meeting for two years.

I have very fond memories of my time at the school and as my book has a dedication to my old history mistress Miss Lucy Clarke, I decided to donate a copy of the book to the Library where I spent many happy hours pouring over the old bound copies of Punch. I think they taught me a great deal about the history of the country my parents had brought me to as refugees in 1947. I particular remember the cartoons and the one about Bismark drawn by John Tenniel, who illustrated the Lewis Carroll’s ‘Alice’ books. It was called ‘Dropping the Pilot’ and was when Bismarck was being forced to resign by Wilhelm II in 1890.

The copy of my book was accepted by Katherine Crouch, Acting Head of the school who was very kind.

Little did I think in those far off days when I sat in the Library, that at the age of 66 I would have a book published – even more unlikely would have been the subject – the Holocaust. Of the 60 or so Old Girls present on 14 May, about 20 were my contemporaries. They knew I was Jewish because I did not go into School Prayers or the religious instruction called grandly ‘Divinity’. However the Holocaust was not discussed in the 1950s and early 1960s, in spite of the Eichmann trial in 1961. None of the women who saw my presentation on 14 May had any idea of my family’s background and experiences and were quite shocked. They were incredibly supportive however and were keen to read the book.

I also remember the mistresses with great affection and in particular there is a dedication in my book to Miss Lucy Clarke who taught me history from the Upper III all the way through to ‘A’ Level – she was at the school from 1928 until she retired in 1964.  Unfortunately other facts about her were difficult to establish. However Somerville College, where she read Modern History 1923-6, revealed that she was born in Sunderland in 1903 and was given the names Lucy Theodosia Merioneth. She was educated at Sunderland High School where she was a member of Panther House and made Captain in June 1919. She only taught briefly at Withington Girls School, Manchester during 1926-7 before she came to Sutton for her 36 year stint. 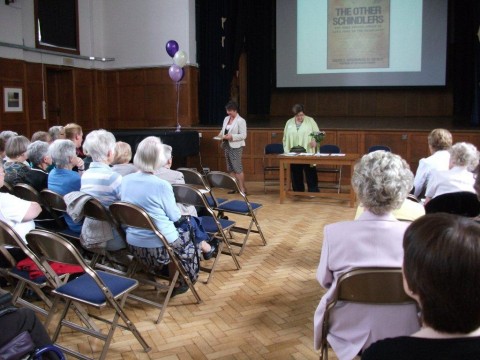 She gave me a love of history which has enriched my life. She was a wonderful teacher, full of pithy sayings which I still use such as ‘education is wasted on the young’. A large charismatic and jolly woman in her vast pink directoire knickers, which we glimpsed from time to time, she drove a battered convertible Morris Minor with windows held together with a kind of ancient sellotape. I last saw her at the 1984 celebrations for the school’s centenary, when she was still chuckling and subsequently learnt she had died in 1993. I think she’d chuckle even more to know about my book.

When I sat in the Library all those years ago I certainly developed a love of books but I don’t think I ever thought I would write one. Ironically I sat on one of the old Library chairs to do most of the revision of my manuscript and am sitting on it as I write this Blog. Some years ago the school changed the old oak ladder-back chairs for modern blue ones and the old ones were offered for sale to the Old Girls – I bought two at the bargain price of £25 each.

I hope the girls who read my book in the Library will learn a little about the Holocaust, be inspired by the stories of the courage of the rescuers and the rescued and realise that they too can write a book even if they wait until they are drawing a pension!!!!

Further to this blog, I received the following message from Sue Lavery on 8 August 2011.

I have just finished reading your book, bought from you at the SHS OGA day in May. I have found it most interesting and informative; you have revealed stories that have been kept in the dark for decades and so it is marvellous that they have been drawn out before it is too late. A fascinating and well researched book; congratulations! I am sure that in the relatively sheltered existence most of us were brought up in in Sutton, others, like me, had no idea about your past or the full horror of the war, even though our parents/fathers were heavily involved in it.

The day in May was all the better for your talk and I am so glad I was able to be there and hear it.