Home > Blog > Sir Ludwig Guttmann – The Poppa of the Paralympics

Sir Ludwig Guttmann – The Poppa of the Paralympics 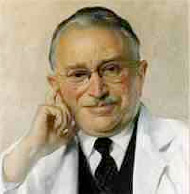 In all the recent joy and enthusiasm for the London Paralympics the name Ludwig Guttmann cropped up regularly. He was called the Father of the games. His German origins were not ignored, but the fact that it was his Jewish ancestry that caused him to find himself at Stoke Mandeville Hospital in 1944 preparing for the casualties, was not always made clear.

He was born in Germany in July 1899 and when he was three the family moved to a coal-mining area. It was here that as a 17-year old volunteer in the local hospital that he came across a young miner with a fractured spine – he was dead in 5 weeks and Ludwig remembered him all his life. He went on to study medicine in Freiburg from 1919 until 1924. Whilst there he was a member of a local Jewish group who fought anti-Semitism in the Universities and began using sporting activities to improve body strength and self-esteem. He career took him into neurosurgery in Hamburg and he also lectured at Breslau University.

However the rise of the Nazis meant that in 1933, as a Jew, he could no longer practise in a public hospital and he was sacked in June. He found a post in the neurosurgical department of the Breslau Jewish Hospital. He received many offers from abroad to help him escape, which he refused thinking Hitler would not last long. In 1938 he began to find the Gestapo interfering with his work with his Jewish patients. He realised the time had come to leave and was fortunate in being sent to Portugal by Hitler’s Foreign Minister, von Ribbentrop. A high ranking official in the Portuguese government was suspected of having a brain tumour and Guttmann, as the best-known brain surgeon in Germany was sent to treat him. He had the foresight to take his family and it was agreed that he could return via London.

Once in London, they contacted the Society for the Protection of Science and Learning, who were helping Jews leave occupied Europe. Sir William Beveridge was the instigator of this organisation set up in 1933 and helped 100s of fleeing Jewish academics come to England and provided them with funding for living expenses.. It later became the Council for Assisting Refugee Academics (CARA) – see http://www.academic-refugees.org/

Ludwig’s first post was at the Radcliffe Infirmary in Oxford where he did research because as a German doctor he wasn’t allowed to operate. Apparently he was also busy persuading Churchill about the Nazis’ plans for the Jews of Europe. It was in 1943 that the Stoke Mandeville Hospital was set up to deal with expected spinal injuries from the opening of the second front and Guttmann was invited to run it. He used his links with Howard Florey and Ernest Chain who were developing Fleming’s discovery of penicillin at Oxford University. Guttmann insisted on complete independence and from the start set out to re-integrate his patients into society however bad their injuries were. His experience as a young medical student made him understand the importance of sport in this process and he always remembered the fit young miner who died.

The first games were planned to coincide with the opening of the 1948 London games and involved 16 ex-servicemen and women competing in Archery. The games were held every year and in 1952 a group of Dutch paraplegic war veterans joined them, making it an international event for the first time.

Guttmann’s daughter Eva Loeffler, now 80, told the BBC that it was only in 1960 that her Father had the idea of turning what had been the annual Stoke Mandeville Wheelchair Games, into an event parallel with the Olympics every 4 years. The games held in Rome in 1960 were the first with 300 wheelchair athletes participating and getting them there by aeroplane in those days was very difficult. Guttmann received many honours over the years, culminating ion a knighthood in 1966. The last games he attended were the Toronto games in 1976. Eva describes these as the first true Paralympic games as people with other disabilities – amputees, the blind and those with cerebral palsy were included. He died in 1980, but Eva was delighted to be invited to be the Mayor of the Athletes’ Village for these London games and welcomed over 4,200 competitors to London. In the 1950s he said ‘I dream of the time when there will be an Olympic Games for the disabled’. She said of her Father ‘His dream has come true. He just realised that things would go forward – he was not one to look back at all’. Eva said ‘The Paralympics are his memorial’.

Eva in the Athletes’ Village

Guttmann’s remarkable story demonstrates something that may often be overlooked. Sir Ludwig managed to escape his cruel destiny at the hands of the Nazis. Had he not done so and perished at one of the vile death factories of the Holocaust, his concept of encouraging wounded soldiers to use sport as part of their recuperation might not have occurred to anyone else. So the Paralympics might never have been devised. Imagine what we would have missed. Surprisingly, it was one man’s initiative that created the games millions have just seen, enjoyed and participated in. Does this not make us gasp at what we lost when 6 million Jews, including 1.5 million children, were murdered in the Holocaust? What other potential brilliant and innovative ideas to improve our world and its society were snuffed out – burnt in the camps’ crematoria or buried in those mass graves?