Righteous Muslims praised at the House of Lords 13 September 2011

On 13 September I was privileged to be invited to an event at the House of Lords hosted by the Conservative Muslim Forum at which a booklet ‘The Role of Righteous Muslims’ was presented. It was written by Fiyaz Mughal OBE of Faith Matters and Esmond Rosen. The event was hosted by Lord Sheikh who chairs the Forum which he founded in 2005. 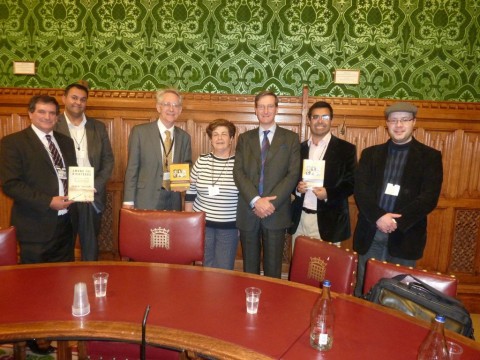 Agnes attending the presentation of 'Righteous Muslims' at The House of Lords with Esmond Rosen and Fiyaz Mughal ( on left of photo) and the Attorney General, Dominic Grieve on her left.

The cover of the book quotes the two holy books of Judaism and Islam – with their almost identical quotations – ‘ Whoever saves one life saves all of mankind’ from the Qur’an and ‘If you save one life,it is as if you saved the world’ from the Talmud.

The book describes the actions of some of the 133 Muslims who have been recognised as Righteous amongst the Nations by Yad Vashem. It contains a quotation ‘If you deny the Shoah, you also deny that there were noble Arabs and other Muslims, those who put their lives on the line to rescue Jews’ a quotation from Rabbi Abraham Cooper from the Wiesenthal Centre. As I sat listening to the authors talk about the courage of these Muslims, I wondered how I could have researched for so long without being aware of this aspect of the Holocaust.

Last year I did see a film about Albanian Holocaust rescuers called ‘Rescue in Albania’ where I learnt that Albania was the only Nazi-occupied country that had more Jews at the end of WWII than at the beginning. This was based on the tradition of BESA which means literally – ‘to keep the promise’.  It’s about the Muslim tradition of hospitality and caring for guests. It led the Albanians to feel they had an obligation to protect the Jews amongst them from the Nazis.

In 1987 Gavra Mandil wrote to Yad Vashem about the family who had protected him and his family:

In those difficult times the Albanian people revealed themselves in their full glory and greatness. There was not one Jewish family that failed to find shelter within the Albanian local population, whether with poor villagers or with owners of estates and manor houses. No Jew remained without the protection of an Albanian. In many cases, like our own, the hiding of Jews involved the danger of death and required colossal self-sacrifice! Our family of four and another Jewish family of three was saved thanks to the shelter we found at the home of the Veseli family in a small village called Kruja in Albania. Like us all the Jewish refugee families from Yugoslavia, who were in Albania in those years, were saved. They attached the greatest importance to human life, in a most natural and understandable way.

In the booklet you can read about some of these remarkable people like Selahattin Ülkümen  who was the Turkish Consul on the island of Rhodes when he was 30. He reminded the German officer in charge that Turkey was neutral in the war and him that under Turkish law all spouses of Turkish citizens were regarded as as Turkish themselves and insisted that  people married to Turks became Turkish citizens and had to be released. The Gestapo believed him and released about 50 people who would otherwise have been murdered at Auschwitz.

Other Muslims in various countries hid Jews in their homes, as many of the rescuers in my book did. Additionally they also rescued the famed Sarajevo Haggadah, which pre-dates the Spanish Inquisition, from being seized by the Nazis

There is a final section about the only Holocaust Museum in Palestine founded and funded by a Muslim lawyer, Khaled Mahameed. He speaks of the need to understand the Holocaust’s impact on Israel and Palestine and the need for Arabs to understand this.

I reccomend this booklet to everyone interested in our common humanity. As one of the authors Fiyaz Mughal wrote in the Foreword:

The Righteous Muslims booklet shows us that there are many stories of positive Muslim and Jewish interaction, even at the darkest moments in history. It shows a common bond and a link between people of two faiths who believe in the compassion of God and in the sanctity of life. Whilst the politics of the Middle East may block such stories out of the public narrative, there is a duty on us all to ensure that they get their rightful place in our social and educational narratives.

These are stories here that everyone should know. Over 65 years after the end of the Holocaust, this work is long overdue.