On 14 December I was privileged to be present when the UK copy of the remarkable International Tracing Service (ITS) Archive was formally presented to the Wiener Library. At the event hosted by Sir Andrew Burns, the UK Envoy for Post-Holocaust Issues, in the Locarno Suite, a digital copy was accepted by Ben Barkow, Director of the Wiener Library. The Locarno Suite is not a venue for ballroom dancing as some might surmise, but a suite of 3 rooms designed by George Gilbert Scott and the main room where we met was designated as the Cabinet Room but never used as such. They were named after the Treaties signed in Locarno Switzerland in 1925. 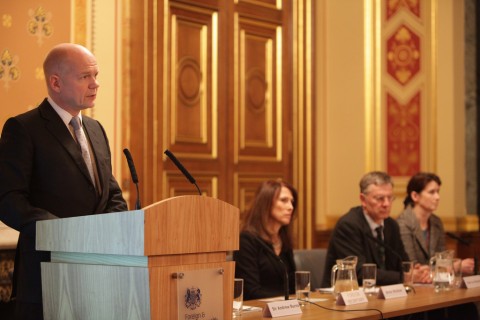 Rt Hon William Hague MP speaking at the launch of the UK copy of the International Tracing Service  14 December 2011.

The archive was created through an initiative in 1943 by the British Red Cross to set up a Tracing Bureau which enabled  the displaced and missing as well the survivors of World War Two to be traced by their families . It is housed in Bad Arolsen in Germany and is one of the largest Nazi archives containing 50 million references on the fate of 17.5 million people. It contains original records from concentration camps, details of forced labour, emigration lists and files from displaced camps. The Archive is available to researchers and visitors but the existence of a digital copy in London in the Wiener Library will make this remarkable record far more accessible. Even today members of families are finding each other.

Eugene Black, a Holocaust survivor of several camps, who now lives in Leeds spoke movingly about using the Archive and so did his young granddaughter. 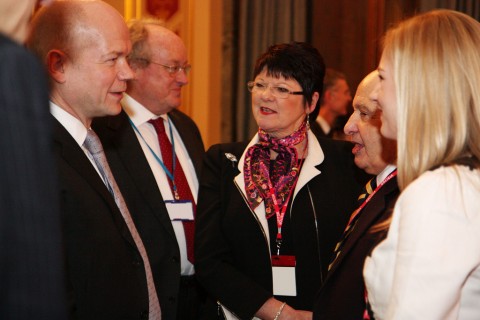 Rt Hon William Hague MP, Sir Andrew Burns, Lillian Black, daughter of Eugene Black  with his  granddaughter  at the Reception in the Locarno Suite at the Foreign and Commonwealth Office.

William Hague, the Foreign Secretary spoke at the event and welcomed the presence of the archive to London and said:

“The International Tracing Service archive is hugely significant. Allowing the British public access to the Archive in the UK for the first time will enable Holocaust survivors, refugees and their descendants to obtain information about the fate of their relatives who suffered at the hands of the Nazis. It will also provide an invaluable collection of primary source material for UK based academic researchers and students, and is further proof of the UK’s active approach to preserving the memory of the Holocaust.”

As I came home feeling remarkably uplifted by the enthusiasm of those working on this project, I thought how much harder the Holocaust deniers task would be with all this evidence available in London as well as Germany.

Please do use the service – you can e mail the ITS via email@its-arolsen.org with your queries. I have enquired about my father who was a forced labourer and my maternal grandfather Armin Klein who died at Auschwitz.

The Wiener Library version will be available once funding of about £70k + running costs has been secured. Ben Barkow thinks it would take 3 to 4 months to get the system established once the funding is in place. Digital copies are currently held at Yad Vashem in Jerusalem, in Washington at USHMM, the Belgian national archive and in France. Poland also has a copy but it is not available to the public.