At the 2011 Holocaust Memorial Day Trust (HMDT) AGM I volunteered to represent HMDT at an event in Wales on 23 January 2012. Thinking about the trip later, I thought that whilst I was in Wales I could renew my acquaintance with Lesley Blower, the Diversity Officer at Neath Port Talbot College (NPTC). We first met in Bath in October 2009 when I spoke at an HMDT workshop for people running events for HMD and met again at a workshop in Neath in December 2009. Apparently Lesley was so taken with my story that she used it for the NPTC HMD event and subsequently persuaded the NPTC’s Department of Horticulture to create a Holocaust Memorial Garden under the guidance of the senior lecturer Bob Priddle.

NPTC is one of the largest colleges in Wales with 14,000 students and 800 staff was created in 1999. It is a tertiary college as well as offering general further education over 8 sites with the main ones being at Neath and Afan. A third of the students are full time, with the rest part-time – all following a variety of courses including 50 A Level courses and 90 vocational courses. In addition Adult and Community Learning is delivered in over 70 outreach centres throughout the county.

I first visited the College in April 2010 when I was honoured to open the garden and plant a tree in honour of my maternal grandfather, Armin Klein, who was killed at Auschwitz in 1944. On this visit I was delighted to see the tree had grown quite a bit. 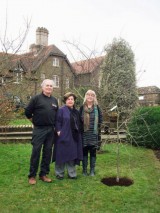 In the garden with Lesley Blower and Bob Priddle

The garden was as impressive as when I first saw it. It is at the college gardens at Twyn-yr-Hydd and is called ‘The Legacy of Hope’  from the 2010 HMD theme. Bob Priddle described it as follows:  ‘This garden was constructed by Level 2 students, undertaking the Work Based Studies in Horticulture course. The garden has chains and barbed wire – symbols of imprisonment. The railway sleepers represent the terrible journey that many endured. Birch trees push through the structure as a symbol of growth and renewal.  All that is necessary for the triumph of evil is that good men do nothing. Edmund Burke.

You can see a full size image of the garden on my facebook page.

The Holocaust Memorial Garden at NPTC

From the garden we visited the Afan site where I showed my PowerPoint presentation which tells my family’s story and how I came to write my book to a group of students. Afterwards we signed the pledge to ‘Speak Up, Speak Out’

Signing the pledge for Holocaust Memorial Day 2012 at Afan.

We then moved to the Neath site where I signed the Library copy of ‘The Other Schindlers’ and signed the pledge again. I left the College uplifted by the enthusiasm of all the students and staff to ensure that the lessons of the Holocaust are never forgotten in this part of Wales and heartened by the warmth of the welcome I had received yet again. 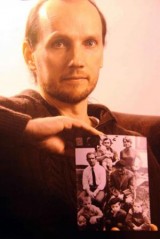 Later that evening I attended the Launch HMD event  for Wales at Cwmbran Stadium in Torfaen with Charlie Lewis the HMDT Outreach Co-ordinator and Olivia Marks-Woldman the new CEO. We had time to view the exhibition of artwork and photos.  The main event was hosted by the Reverend Canon Harald Thomas MBE who welcomed the HMDT representatives. The keynote speaker was Kemal Pervanic who spoke with great emotion of his experiences as a survivor of the Bosnian war and the Serb concentration camp at Omarska.

The unveiling of 'Speak Up, Speak Out' by Janita Tapp and Eileen Mills-Long

The Leader of Torfaen County Borough Council read Pastor Niemoller’s famous poem and the First Minister, the Rt. Hon. Carwyn Jones gave his thoughts on HMD and was followed by the local MP the Rt. Hon. Paul Murphy. Delightful singing by the Nidus Children’s Choir was followed by the unveiling of a specially commissioned painting by two local artists – Janita Tapp and Eileen Mills-Long – on the theme of ‘Speak Up, Speak Out’. The painting is very moving and a most original commemoration of HMD.

We eventually arrived back at Paddington at 11.45pm. It had been a long and eventful day. I felt somewhat weary but overwhelmed by the response I had found to commemorating the Holocaust in Wales and I was glad to have been there to help promote the message. I congratulate everyone involved and all those I spoke to for their interest and compassion. With particular thanks to Lesley Blower, the remarkable NPTC Diversity Officer for her energy and hospitality. Our friendship came out of our work for HMD and long may it continue. I am just left wondering what my poor Hungarian grandfather would have made of his tree in Neath planted 66 years after his death.

PS. My facebook fans increased considerably after my trip – so thanks to Lesley and the students. Join them on www.facebook.com/theotherschindlers

See the following links: The NPTC newsletter about my visit – http://www.nptc.ac.uk/en/news/college_news_story.php?newsid=243