I always knew HMD 2015 would be a big event as it marked the 70th anniversary of the liberation of Auschwitz by the Russian troops in 1945. It fell nine days after my own liberation from the Budapest Ghetto – a 6 months old baby in my mother’s arms – on 18 January 1945. The 2015 theme of Keep the Memory Alive placed the emphasis very much on the survivors and I was naturally pleased with that concept.

What I did not realise until the day was how significant the day would be for me personally. A couple of weeks beforehand I was asked by the HMD Trust to light one of the six candles on the stage to commemorate the 6 million Jews murdered in the Holocaust. 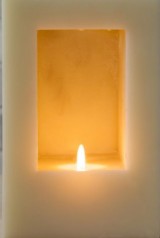 These candles were specially designed for the occasion by the sculptor Sir Anish Kapoor and 69 were distributed around the country to different venues to be lit by local people. The 70th one was taken to Auschwitz and lit by Secretary of State, Eric Pickles.

A few days later, I was asked to be part of the procession with the other 5 candle-lighters and VIPs at the start of the event. Later still I was told there would be a very small reception beforehand to meet the VIPs and other candle-lighters. It was only when I arrived for the rehearsal at 1.15pm on the day, that I discovered Prince Charles would be present. I sat on my allocated seat and watched the rehearsal and noted that the person next to me would be ‘Senior Cabinet Minister 1’ with ‘Senior Cabinet Minister 2’ next to him. I had no idea who they would be.

I then went up to the vast room that held about 200 Holocaust survivors for a special reception. Suddenly there was a bustle of activity and the VIPs appeared and were distributed amongst the various tables of survivors with a ‘minder’ to introduce them to the survivors. This plan rather broke down because the survivors flocked around the dignitaries, happily introduced themselves and told their stories. It was a remarkable scene.

Eventually when survivors were encouraged to go into the main hall for the commemoration, I was escorted to a small room for the VIP reception. I found myself in the company of the other candle-lighters, Prince Charles and Camilla, David Cameron, Nick Clegg and Ed Miliband and my old friend Henry Grunwald who was Vice Chair of the HMDT when I was a Trustee. As you can see from the photo, I had a good chat with the royals and told them about my parents’ experiences in the Holocaust and how close to being sent to Auschwitz my mother and I came in 1944. They were very interested and quite shocked when I said babies were thrown in the fire on arrival at Auschwitz and that would have been my fate. 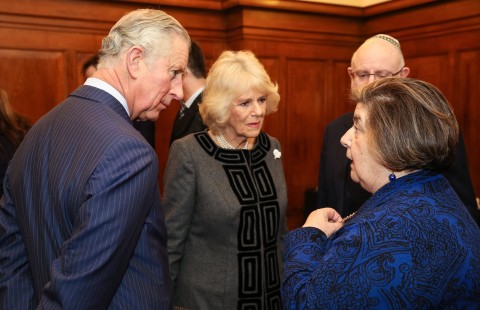 I then had a long chat with Nick Clegg, who was my MP when I lived in Sheffield, and he updated me about local developments. I then had a good chat to David Cameron about my book and before I could get to chat to Ed Miliband, it was time to get into line for our entry. As we waited to go in, I said to the Duchess, ‘I expect you do a lot of hanging about like this’ and she agreed they did. On cue, we paraded in and I was the penultimate person.

Imagine my amazement when I realised I was sitting next to David Cameron, Nick Clegg and Ed Miliband.

Some of the photos have just shown the three chaps but one excellent photographer took this one of little me with the three ‘boys’. They are all very tall, of a similar age and it reminded me of being with my three grown up sons.

I was so proud of the honour I had been given by the HMD Trust and only sorry that my poor parents were not alive to see it. My eldest son, Dan Spier, later commented how in 1945 they would not have been able to imagine that in 2015, when the 70th anniversary came around, their little girl would be lighting one of the 6 candles at the commemoration and sitting next to the Prime Minister as well as mixing with the future king of England and his wife.

With the Prime Minister’s announcement about his magnificent plans for future Holocaust education and a memorial, with a view to preventing anti-Semitism, future genocides and working to reduce prejudice in society, it really felt that the Holocaust had finally taken its due place in the mindset of the country and the establishment. The Trust is to be commended for mounting a remarkable commemorative event which was televised by the BBC with a commentary by David Dimbleby, whose father, Richard Dimbleby, memorably broadcast from Bergen-Belsen when it was liberated by the British in April 1945.

If you missed the BBC broadcast, you can still see it until the end of February by clicking here