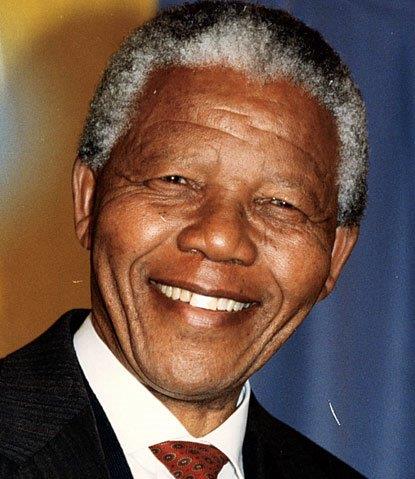 Hearing of the death of Nelson Mandela reminded me of the time I had the chance to hear him speak in London in 2000 with my eldest son Daniel. This is a piece I wrote
very shortly afterwards.

Nelson Mandela was guest of honour at a Board of Deputies’ Dinner in London on 5 April 2000. Prior to the Dinner he spoke to a specially convened meeting of the Board. My eldest son Daniel and I decided this was an opportunity of a lifetime and we went down to London, from Sheffield, for the day.

We were asked to be there by 5.30pm. We were very early and there was already a buzz of excitement in a fairly full hall and more Press stickers and cameras than I have ever seen. There was a slight delay, but eventually there was a silence and then suddenly the side door opened and wedged in a posse of Board officials there was a figure who looked familiar. Much taller than I had expected, I looked at him and had the vacuous thought, ‘He looks just like his photos’.

He just stood still, smiled and overwhelmed by his presence, the many cameras rushed into action. He just stood there smiling and exuding serenity. Eventually the Board officials came back to life and the formalities began, but we were still mesmerized by him and were for the next hour.

He spoke for 40 minutes without notes and discussed his respect for Jews and how it was a Jewish legal firm that gave him his first job. It was through them that he became a lawyer. It was also only Jewish lawyers who were willing to defend him during his trials. He consequently had great respect for Jews. This led him to try to broker peace in the Middle East and he spoke of visiting this Prime Minister, ringing Clinton, visiting that President. He cast a spell on us.

However, my special moment was at the end of his talk. Nelson Mandela had agreed to take questions and I had one ready. I waved my arm and was called to ask the first question which was:

Sir, you have rightly been praised for your positive approach in dealing with your   former enemies. What advice can you give to Holocaust survivors, like myself and other Jews, who over 50 years after the end of the war, cannot come to terms with the enormity of the Holocaust in destroying lives, families and communities?

He looked me straight in the eye and I was really glad I’d asked Daniel to write down his answer because I was spellbound by his eyes for the duration of his reply. He was quick to reply and the gist of it was:

Everyone has sympathy with that painful experience. What we say is that you pass through this world only once and the opportunities you miss, you will not get again. The important thing is to identify yourself with worthy objects, to forget the past and concern yourself with promoting peace and reconciliation even with your enemy.

The best way to reconcile yourself is to concentrate on peace – the greatest weapon that humanity possesses. No useful purpose is served by brooding. It is not easy to talk to your oppressors but if we have not our country would have gone up in flames. You have to control your emotions.

The scars in the heart are invisible wounds that are impossible to heal.

He answered a few more questions, smiles serenely again and meandered out of the hall with everyone trying to greet him. On the train home I said to 21 year old Daniel, ‘When you are an old man you will be able to dine out on this.’ I felt emotionally and spiritually lifted for days. A marvellous experience – face-to-face with a giant of our times.”