Whilst I was involved with curating the Koestler Awards in July, we looked at photos of an enormous sculpture that had been welded by a group of prisoners.

It reminded me of something I had quite forgotten – in 2002 I undertook a one day welding course organized by a Sheffield woman sculptor whose name I have unfortunately forgotten. I had visited an exhibition of hers in Sheffield and expressed enthusiasm about trying welding. She mentioned she was running some one day courses and so I put my name down.

On the due day, I decided to make a garden ornament and had great fun cutting the leaves – but it’s really scary with the mask on trying to manoeuvre the equipment. Having cut the leaves, I then had to fix them to the stem I had previously shaped which was about as tall as me. When I had finished I was really proud of my effort. 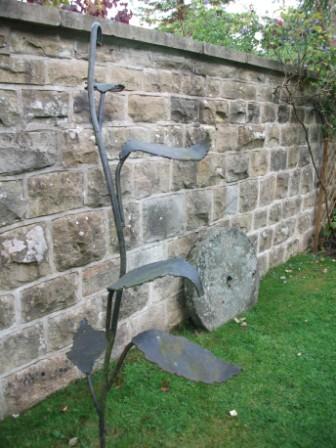 Disappointingly, I couldn’t take it home that day as it had to cool down. Because of its size, I had enormous trouble getting it into my car but eventually I managed it and it was duly planted in a bucket of concrete in my garden where I photographed it last week.