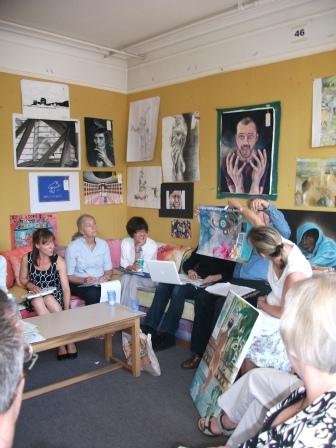 When I first read about the Koestler Trust project in the March edition of Magistrate I immediately knew it was something I wanted to do.

I knew about Arthur Koestler from my research on the Holocaust. He was a Hungarian Jew like me. However he was born in Budapest in 1905 and at an early age became a journalist in Berlin. However 4 years later he left and joined the Communist Party and moved to Paris. In 1936 he was reporting on the Spanish Civil War when he was arrested for the first time and was imprisoned for 3 months by the fascists. Although he was released after 3 months the experience had a profound effect on him. He wrote a novel Darkness at Noon and left the Communist Party.

Before long he was imprisoned for another 3 months by another group of fascists. This time he was in France in the notorious Le Vernet Detention Camp which resulted in another book The Scum of the Earth. His escape took him to England where yet again he was imprisoned briefly – this time as an enemy alien in Pentonville prison.

These experiences led Koestler to be concerned about imprisonment and having been involved in the fight to abolish hanging in the UK in the post-war period, Koestler became concerned about prisoners who were serving long sentences. The Koestler Trust was created in 1962 to promote art by offenders and has held an exhibition each year – recently the venue has been the Royal Festival Hall. The exhibition is curated by a group of volunteer curators – in recent years women prisoners and victims of crime have been the curators. This year the Trust invited magistrates from all over the UK to take on the task and 12 of us were chosen.

We were asked to be available for 12 days from 11 July and we met at the Koestler Trust HQ next door to Wormwood Scrubs Prison. We were supported by the Trust’s staff and our facilitator Helen Sendler who had helped the curators last year.

We were all quite overwhelmed by the amount of work assembled in the house – 7,500 assorted works in 59 categories from 400 different institutions. Every wall and every surface and most of the floors were crammed with assorted works. We were all staggered by the diversity of the work and some of them came with explanations which were poignant.

As magistrates we have been trained to be fair and impartial and to treat everyone equally. This led us to decide that everyone would look at every piece of work which was an enormous task. We had to reduce the 7,500 items to 150 as this was all that could be accommodated in the allocated space at the Royal Festival Hall. The decisions were made all the harder because we knew how much inclusion in the exhibition would mean to the prisoners whose work was chosen – it could change their lives as we knew from some of the ex-offenders who were employed by the Koestler Trust to help prepare for the exhibition.

To achieve the 150 items we chose items in groups and then made a pitch to the rest of the group who voted whether it was long listed. This gave us a long list of about 180 which was reduced to 150 by voting again. Individual curator’s personal choices that the group rejected will be displayed with explanations of why we really liked them – it did become quite emotional. 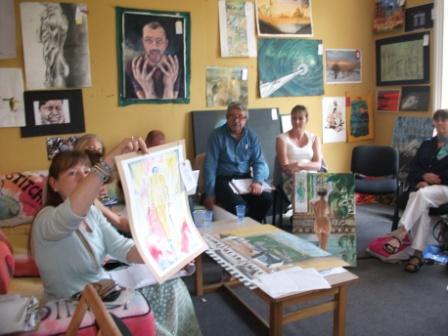 We had quite a few outings to help develop our curatorial skills. We visited the Saatchi Gallery’s current sculpture exhibition and Tracey Emin’s exhibition at the Hayward Gallery. I must confess to not being a fan of Tracey’s but I did make a conscious effort to go with an open mind. However I did find the work very self-indulgent and as one of my colleagues remarked she seemed to show no interest in the rest of the world. I was shocked to learn that the embroidered blankets, complete with spelling mistakes, were valued at around a million pounds each and had in fact been worked by other people. Obviously being a magistrate where your time is given on a voluntary basis, is a mug’s game. 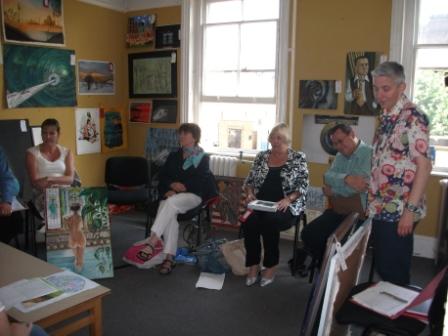 The exhibition I enjoyed most of the three we visited was the Jerwood Makers Open at the Jerwood Space. I liked the smallish venue with 4 artists work displayed. I particularly enjoyed Heike Brachlow’s balanced glass sculptures in a single colour. They were very satisfying to look at it and quite beautiful.

The other venue we visited was the Spirit Level at the Royal Festival Hall where our exhibition will be displayed. It was difficult to imagine the space as it was housing the celebration of the 60th anniversary of the Festival of Britain and was well attended by people of my age reminiscing about their visits in 1951.

Apart from the problem I had with my familiarity with many of the iconic items from my childhood, there were various false walls and very subdued lighting which made it difficult to envisage the space we would be filling. Our exhibition will be open from 21 September – 20 November and is free – the exhibits are for sale and I do hope the exhibition will be well received. We worked really hard to make a representative selection and I am really excited  at the prospect of seeing all the items expertly hung. Do come along and see what you think.