On 21 January, I made my sixth visit to the NPTC in as many years. These visits resulted from my meeting their Diversity Officer, Lesley Blower, at a Holocaust Memorial Day Trust workshop in Bath in September 2009. I have always had a very warm welcome and been impressed by the engagement of the students and staff.

This visit was very special for me because the Holocaust memorial garden which I opened in April 2010, had to be moved from its original site which was no longer part of the College. ( See earlier Blog of 31 January 2012) On my last visit the new garden at the Neath site was looking rather sad. On 21 January it looked wonderful and I was delighted to see the tree I had planted in memory of my maternal grandfather, Armin Klein, who was killed at Auschwitz, had not only been successfully transplanted but also had a label with his name. I was very moved as he died around the time I was born in July 1944 and so I never knew him, but at least he is no longer an unknown victim.

In the memorial garden with my friend Lesley Blower, the Diversity Officer at the College

Later I spoke to a lecture hall packed with 130 students and staff. I made my presentation about my family’s experience in the Holocaust in Budapest. The audience, as always at NPTC, were very attentive and asked many probing questions. After wards Lesley sent me some written feedback which I found very emotional. Many of them said how moved they had been by my story and many particularly mentioned Armin Klein being taken off a bus because he was Jewish and sent to Auschwitz without being able to tell his family and say goodbye.

Callum Lewis wrote ‘After the talk, it really struck me how awful the abuse to the Jewish people was and how a human being could be treated so horrendously. Why someone should be abused and killed for believing in something and being themselves is horrendous and inhuman. I can only imagine the effect this had on Jewish people and many others years after being in concentration camps. It really implanted to me how evil and twisted Hitler was.’

Tony Nash wrote that after I told them how the Holocaust had affected my family: ‘I felt more aware about it and made me think what my opinions were on the subject.’

I found reading the feedback very emotional and there is no real way of knowing how much difference such an experience can make on these young people. In the evening there was a ceremony of remembrance where some of the students read their own choice of poetry or prose. 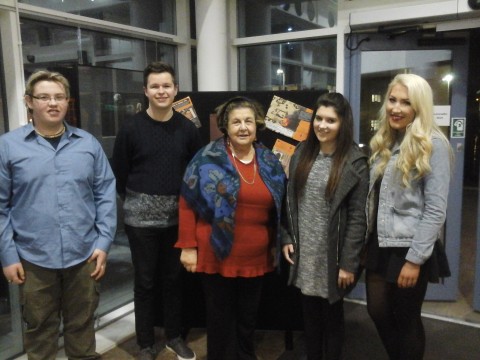 By chance, Cory had chosen to read one of my favourite poems from the Holocaust, WH Auden’s Refugee Blues. I always wondered how such a man came write to a poem about Jewish refugees and discovered that when Auden went to America in 1939, he met and fell in love with a Jewish poet, Chester Kallman.

The College was chosen to light one of Anish Kapoor’s 70 specially designed candles on HMD. I was not able to be at Neath’s actual HMD event on 27 January 2015, but I was moved to see from the photos that the students took their lantern up to Armin’s tree with the Mayor and Bob Priddle, who designed the memorial garden and supervised the students who created it and moved it.

I was disappointed that I did not get a chance to see Bob, who is now retired, during my visit.

I take enormous pride from the relationship I have with the College after my six visits and also my friendship with Lesley. It really is encouraging, in these difficult times with the rise in anti-Semitism all over the world, to see how responsive each new set  of students are to my talks about my family in the Holocaust. One student Tom Smith ended his feedback ‘I hope she continues to travel around the UK expressing her story to many others.’ I hope to continue to do so for many years.