Home > About the Book > Film or TV series

Now that my years of research have been turned into a book, my next ambition is to have the book turned into a film or TV series. I think it would be wonderful to have these remarkable heroes brought to life and filmed in the very places where the rescues took place. There is a certain urgency over this as since my research was started in 1999 several of my informants have already died. Even since the book was published one rescuer, Jaap van Proosdij, (see page 4 on the link) and one rescued, Margaret Kagan, have died in 2011. At present there are still rescued and relatives of the rescuers who can be interviewed and filmed in the place of rescue – some of them were present at my London Book Launch. As time moves on this will become increasingly difficult. 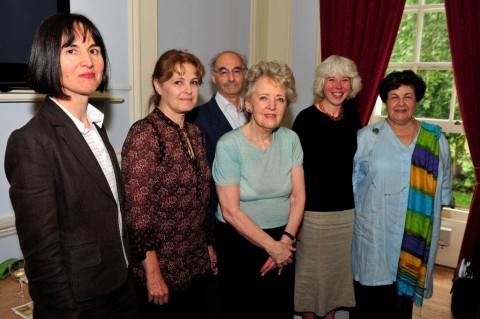 Relatives and informants at London Book Launch, Board of Deputies, 9 June 2010.

The people in this photo are left to right – Delia Webb great, great niece of Bertha Bracey, Monica Porter daughter of Vali Rácz, April Fawcett widow of Charles Fawcett, Henri Obstfeld who was hidden as a small boy in Holland by the Klerks and Jo Huffener, daughter of Henk Huffener.

I am in touch with many other relatives but they were unable to get to the Launch either because of distance or because they live abroad.

I should be absolutely delighted to hear from anyone who would like to discuss this project with me – sooner rather than later please.