British Heroes of the Holocaust and ‘The Other Schindlers’ 2010 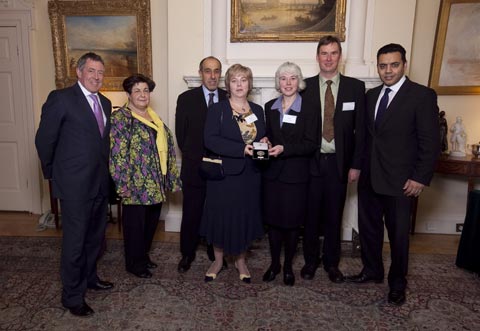 Henk Huffener's daughters Clare and Jo with his medallion

On 10 March 2010, the Prime Minister of the United Kingdom, Gordon Brown, honoured a pledge he had made on a visit to Auschwitz in 2009. At a reception at his official residence, No 10 Downing Street, he recognized 28 British Heroes of the Holocaust by presenting them with a sterling silver medallion.

Gordon Brown often speaks of the way his Scottish clergyman father John  instilled in him knowledge of Israel from his earliest days. In April 2009 he was the first British Prime Minister to address the Israeli Parliament, the Knesset, in Jerusalem. During the course of his speech he told the Knesset members:

My father was a Minister of the Church who learned Hebrew and had a deep and life long affection for Israel. For three decades he was a member of – and again and again Chairman of – the Church of Scotland’s Israel Committee. And he travelled back and forth to Israel twice every year, often more.

After each trip, he would roll out our old film projector, plug it in and load the film. More often than not, the projector would break down – but he would always get it back up and running. And I will never forget those early images of your home in my home and the stories my father would tell.

This background must have been in his mind when on the previous day he had visited Auschwitz-Birkenau with his wife Sarah. Both were visibly moved by what they saw and Gordon wrote in the Visitors’ book:

What we have seen this afternoon is a harrowing testament to the murder of so many who suffered the extremes of terror. What happened here is a shared human story, a perpetual reminder of all the darkness of which the world is capable, but also a story of what the world can endure and survive.

In this place of darkness, I reaffirm my belief that we all have a duty, each and every one of us, not to stand by but to stand up against discrimination and prejudice. As we remember the worst of our past, we must commit ourselves to serve the best of our future.

Later, on 29 April in the House of Commons Gordon Brown announced the British Heroes of the Holocaust scheme and immediately information was being collected on those eligible for the award. Earlier in his career as the Chancellor of the Exchequer in 2005, he had provided funding until 2011 for two teenagers from every senior school in Britain to visit Auschwitz each year.

As soon as I became aware of the forthcoming awards I decided to begin my campaign to get the Rescuers I had researched honoured. I had researched 30 rescuers from all over Europe and explored their motivation for such courageous actions in my book ‘The Other Schindlers’.

My personal history is that I was born in Budapest in July 1944 to Jewish parents Leona and Philipp Grunwald. My Father was sent as a forced labourer to the eastern front by the Hungarian fascists in 1943 and my the time the Germans occupied Hungary on 19 March 1944 my Mother was pregnant with me – she always said I was conceived when he was back on leave.

Some time after my birth my Mother was told she had to report the next day. I don’t know how much she knew about what was happening to Hungarian Jews, but when she turned up with me in her arms, the man in charge sent home the women with children. But for him we would have been on the train to Auschwitz with all the other hundreds of thousands of Hungarian Jews – including my maternal grandfather Armin Klein.

I have lived with this fact all my life. When I was 52 in 1996 I decided it was time to study the Holocaust and undertook a Master’s course in Holocaust Studies at Sheffield University. When I had to write a Dissertation, I chose to write about Varian Fry – for many years the only American recognised as a Righteous Among the Nations for his work rescuing persecuted Jews in Marseilles in 1940-1 . The research for this created a curiosity in me over the motivation of Holocaust rescuers when it was such a risky undertaking.  I therefore decided to pursue the subject and searched for people who had been rescuers or had been rescued.

I had personal contact with the individuals concerned or their close relatives. This enabled me to ask about the motivation of the rescuers and to provide an insight. I also attempt to identify the significance of the Holocaust and the rescuers in today’s world. Sir Martin Gilbert, the UK’s most eminent Holocaust historian wrote in his Foreword to my book:

I considered 3 of my rescuers were eligible to be considered for the British Heroes of the Holocaust medallion. They were Bertha Bracey, Henk Huffener and Charles Fawcett.  Bertha was an English Quaker who was active in the creation of the Kindertransport scheme when 10,000 mostly Jewish children were brought to safety in England in 1939 – sadly without their parents. Henk Huffener was a Dutch man whose family had been involved in the Resistance and he rescued many Jews from the Nazis and came to England after the War. Charles Fawcett was a charismatic American colleague of Varian Fry’s in Marseilles who had lived in London for many years.

The medallion was produced by a firm called Gladman and Norman based in Birmingham in the West Midlands. In 2008 Worcestershire Medal Service was granted a Royal warrant as Medallists to her Majesty Queen Elizabeth II. They produce the medals the Queen presents to citizens honoured twice a year in the Honours List.

British Heroes of the Holocaust Medallion 2010

The medallion – so called because it has no ribbon to allow it to be worn – was made from solid sterling silver, 50mm across (approx. 2 inches) and weighing 66 grams ( 2.328 ounces). The brief was the concept of ‘a universal celebration of exceptional British citizens who through their bravery and selfless actions, helped to save Jews and others in the Holocaust’.  The obverse side shows clasped hands with a background of clouds. Phil McDermott explained that ‘The medal is designed on a background of clouds symbolising the ‘dark cloud’ that, in the words of Winston Churchill, gathered over Europe.’ The words ‘In the service of humanity’ are engraved round the edge. The reverse has the words ‘In recognition of …….. whose selfless actions preserved life in the face of persecution’ leaving space for the recipient’s name to be engraved.

I was delighted to be present at No. 10 Downing Street on 10 March as, aided by some forceful lobbying by me, two of the rescuers I had written about in ‘The Other Schindlers’ – Bertha Bracey and Henk Huffener  – were included in the list. Unfortunately as Charles Fawcett had never taken British nationality, he was not eligible. Bertha’s great niece Pat Webb, who is shown as a small girl in my book, together with her husband Donn and daughter Delia received Bertha’s medallion. Henk’s daughters Clare and Josephine, whom I only tracked down on the evening of Friday 5 March, together received, Henk’s medallion. 28 heroes all together were honoured that day and many bloggers have written about these awards, including those rescuers who I championed.

I was very disappointed at the private presentation as I wanted to see ‘my rescuers’ relatives’ get their medallions but the officials were quite inflexible about letting me in to see Bertha’s relatives receive her medal. However Henk Huffener’s daughters very generously said they would not be there without me and insisted I went in with them when they received Henk’s medallion.

When the medallions had all been awarded, Gordon Brown came in and spoke to most of recipients. See photo above – I am on the extreme left with the yellow scarf with my youngest son Simon. Gordon Brown then spoke to everyone and said:

It is with the greatest of pride and the most profound humility that I welcome you here for this celebration of what I call selfless humanity.

The Holocaust is modern history’s darkest chapter. It is the most grievous example of degradation and depravity by men and women to men, women and children. It is against that background that the courage of those we recognise today, who risked their lives to save others, stands out all the brighter.

Those individual acts of bravery – undertaken knowing, that if discovered, the highest price would be paid – are not dimmed by the passing of the years. As we mark this year the 65th anniversary of the liberation of Auschwitz, let us never forget that what happened is, yes, an epic of cruelty but yes, too, it is an epic of courage, of people who did so much to help other people in need.

These words apply to all the rescuers in my book too. As HE Dror Zeigerman, Israeli Ambassador in London, said to Henk Huffener on 3 February 1999 when he presented him with his Righteous Among the Nations Medal – ‘You are a shining light amid the darkness of the Holocaust; your stunning bravery is a testament to all humanity.’

PS. Henk Huffener became a well respected antiques dealer in this country and items from his collection are still available. See this wonderful little terracotta horse and rider from China dated around 200-500 AD – http://www.artancient.net/servlet/the-1400/EXTREMELY-Rare-ancient-Chinese/Detail